We saw a neurosurgeon in Little Rock this afternoon. He said Kristina's case is pretty unique in his experience, in that the symptoms don't normally get this bad this fast. So there's that.

Rather than jumping straight into surgery, though, we're going to do another spinal tap tomorrow, so we can see if the meds are working or not. If her cerebrospinal fluid pressure's good, he doesn't think a shunt is strictly necessary. If her pressure is too high, though, we'll schedule surgery for later in the week.

I think that's a good tack. Shunts are doodads that happen to be inside your body. Doodads sometimes break. When they break, they require follow-up surgery. That's no fun.

What we'd really like to see tomorrow is low cerebrospinal fluid pressure. That would be an indication that the meds are working.

Black is bad. White is good. 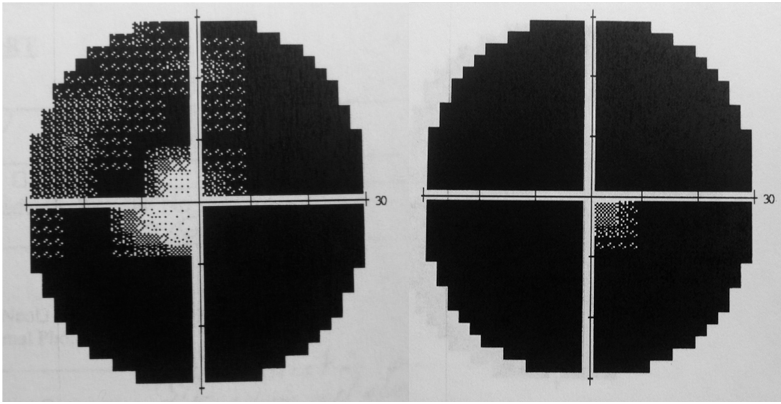 I just tossed this together real quick, so I know it's not high-quality. These were visual field tests done Thursday. Each circle represents the full field of a normal person's vision while looking straight ahead. Her vision may continue to improve over the next two or three days, but you can see that there was profound damage to her eyesight.

Words one never wants to hear from a doctor: "This is bad. This is really bad. This is worse than I thought."

Kristina and I heard those words today, sitting with an opthamologist who'd just looked at detailed scans of her eyes. Kristina's vision is permanently damaged. He's very concerned at this point that we take the utmost care in her treatment not to lose what vision she has left, so he plans to consult with her neurologist later today to discuss her treatment. At the top of the list of probabilities is a trip to Little Rock to put a shunt in, directing any fluid build-up away from Kristina's brain and into her abdomen. The point, again, is to protect what's left of her eyesight. We aren't talking long-term treatment yet.

We may never know if permanent vision loss could have been avoided. I might not get loud and rowdy if I bumped into one of those yahoos that looked in her eyes and missed (quoting the doctor who finally identified the real issue) "the worst edema [he's] ever seen." But if I'm having a bad day, I might.Right now we're both sad, scared and mad...and we're holding onto the hem of His robe. And I think that means we'll be okay.

Kristina's been dealing with some pretty substantial health issues for the last week or ten days, and now that we finally have a solid diagnosis, we're due an update for the Big Wide World.

For the big-word geeks: idiopathic intracranial hypertension. Another older terminology is pseudotumor cerebri. Basically what this boils down to is that Kristina has a build-up of cerebrospinal fluid in her head, and that mimics the behavior of a tumor. This diagnosis makes sense of all the seemingly disparate and steadily worsening symptoms she's had over the last several days.

The nerves in the back of Kristina's eyes were badly swollen for several days, and they are now damaged. About her sight, she says it's like looking through a really thick piece of white tissue paper. So, severely impaired. We have a few follow-up appointments scheduled next week, but what we've heard from the doctor so far is that we'll just have to wait and see if, when and to what extent her vision will return.

She's had some complications from yesterday's spinal tap (which she turned all the way to 11, I'll have you know), so she's been ordered to lie flat as much as possible for at least through the weekend, and possibly for as long as a week. The doctor also ordered heavy caffeine consumption: a cup of coffee per hour for five or six hours a day until these symptoms fade. Buzzzzzzzzzzzzzzzzz. ;)

Lots of folks are asking if and how they can help. Short answer: I don't know. Kristina's mom has flown in from Charlotte... THANKS, JEANNE!!! Kristina's going to get bored, so visits from sweet friends are always welcome. I think we'll be able to keep on top of housework, food, etc., at least while Jeanne's here. I think she's planning to be here for as long as we need her, though, so...there you go. If you want to do something for us, we're probably not going to turn you down, but we're also probably all too frazzled to tell you what we need. Just ping us if you have some ideas. Email, text, call, Facebook, Twitter, IRL...you get the idea.

We welcome your prayers, with this one request: There's nothing wrong with hoping and praying that God will show His bigness by fully healing Kristina's vision. We want that, too. But more than that, we want Him to show His power by giving us joy in His Lordship, in His constant goodness, regardless of circumstance.

Sometimes He doesn't heal. And we want to live like we believe that's good.

"I do believe, but help me overcome my unbelief!"

Aylin came home from school recently having learned "We will rock you".

Just now she climbs up on my lap where I'm sitting in the rocking chair and says to me quite seriously: "I'm gonna rock you, mamacita". I responded "You are?". Her reply "yes, sometimes ya got mud on your face..."

It took me a moment to connect the two. But I got there. ;-) 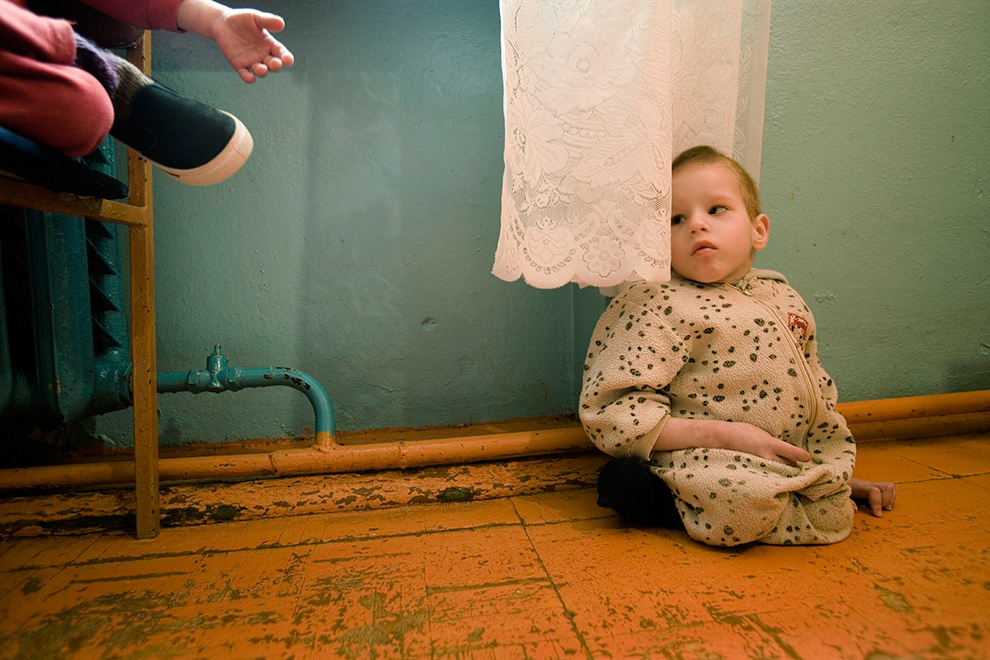 Severely physically and mentally handicapped, 5-year-old Igor was given up by his parents and now lives at a children’s mental asylum, which cares for 150 abandoned and orphaned children with disabilities. It is one of several such facilities in rural southern Belarus receiving support from Chernobyl Children International, an aid organization established by Adi Roche in 1991 in the aftermath of the world’s worst nuclear disaster. Vesnova, Belarus, 2005 (Gerd Ludwig/INSTITUTE)# 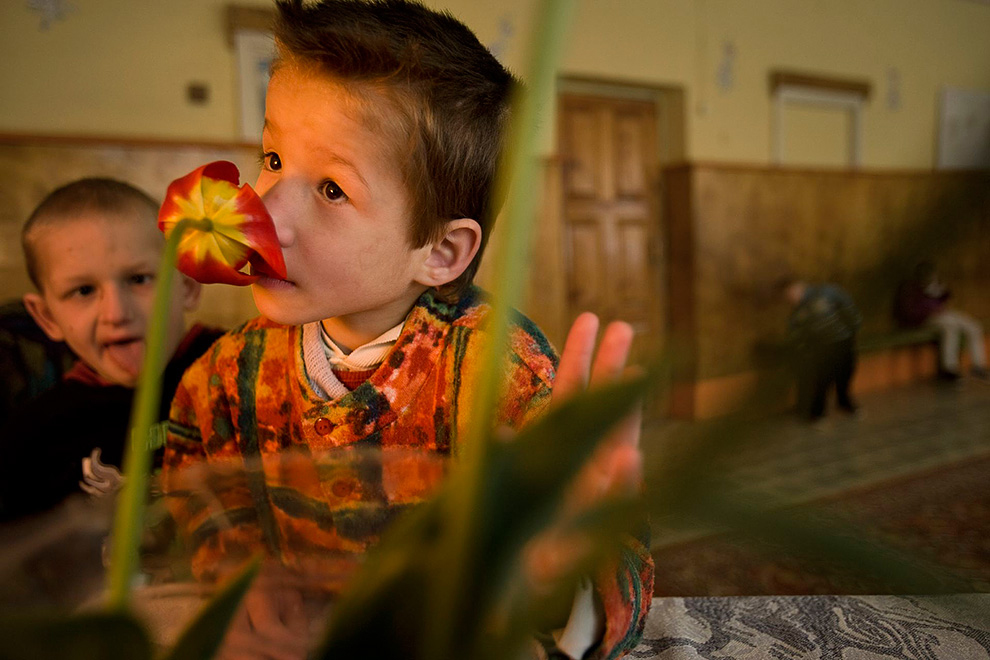 In an orphanage in Belarus, a mentally disabled boy enjoys the scent of a tulip. Children born in the fallout region are said to have a higher rate of birth defects and retardation, a belief supported by many—but not all—in the scientific community. International aid organizations established in the aftermath of the disaster continue to provide much needed financial support to homes and orphanages housing children affected by the fallout. Vesnova, Belarus, 2005 (Gerd Ludwig/INSTITUTE)#

Aylin is sitting in her beanbag watching Dora one weekend mid-day
Me: Aylin, would you like some lunch?
Aylin: Sure! I want it right here.
Me: I'm sure you would! ...

Aylin has started talking like a thirteen year old. "So, and, ah... I did not kick. Or hit..." I am convinced that sometimes, if she doesn't talk constantly she will simply explode.

When asked how old she will be at her next birthday "Thirty!" apparently we're multiplying it by 10.

Aylin gets a fruit snack in the morning on the way to school, usually yogurt covered raisins, regular raisins, or cranberries. I've started telling her if she doesn't finish them before she gets to her classroom then she must share with her friends. Now all the kids await her arrival and I was concerned we would have to stop altogether. But she handles the mob well. She covers the snack with both hands and requires the kids to line up, and ask nicely. Theres also lots of "just a moment", "wait patiently" throughout the process. Its pretty cute.

"Shut Up" is a bad word in our house. One that will get you a time out. So any time she hears it, particularly on the TV, the following occurs.
Aylin: "that man said shut up. I did not say shut up. We don't say shut up."
Mom/Dad: "ok, but don't say it any more".

While visiting Papa Joe, G'ma Linda, and Great G'ma Bernie. G'ma Bernie was going to be leaving so we told Aylin to tell her bye-bye and I love you. She gave her hugs, and told her bye. But apparently never said I love you. Several minutes after Bernie had left Aylin exclaims "Where's Grama Bernie? I've got to say I love you!" then was momentarily concerned/distraught that Bernie had left.

The little goof also enjoys shakin' her groove thang. I brought her to the office with me the Friday before Christmas because daycare was closed and I was only supposed to be in the office a few hours. I think she spent more time dancing for my co-worker and chatting it up with her than she did with me. But they enjoyed each other, and my co-worker has 3 young ones of her own. So it worked out well.

Much fun was had by some. Any guesses as to who the Scrooge was? ;-) 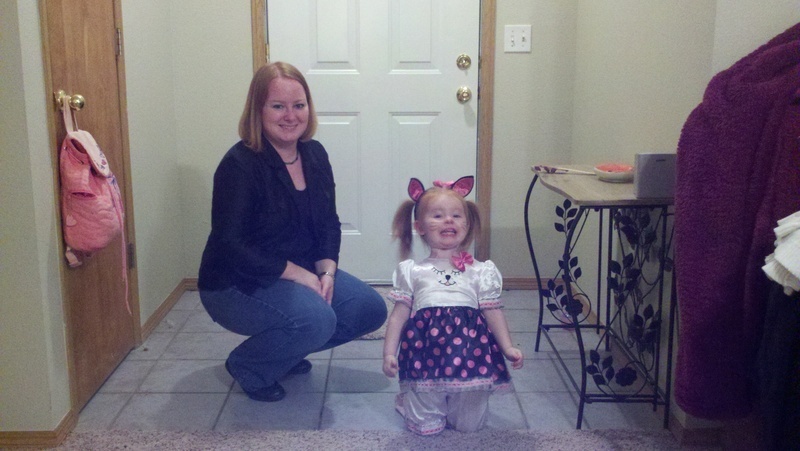 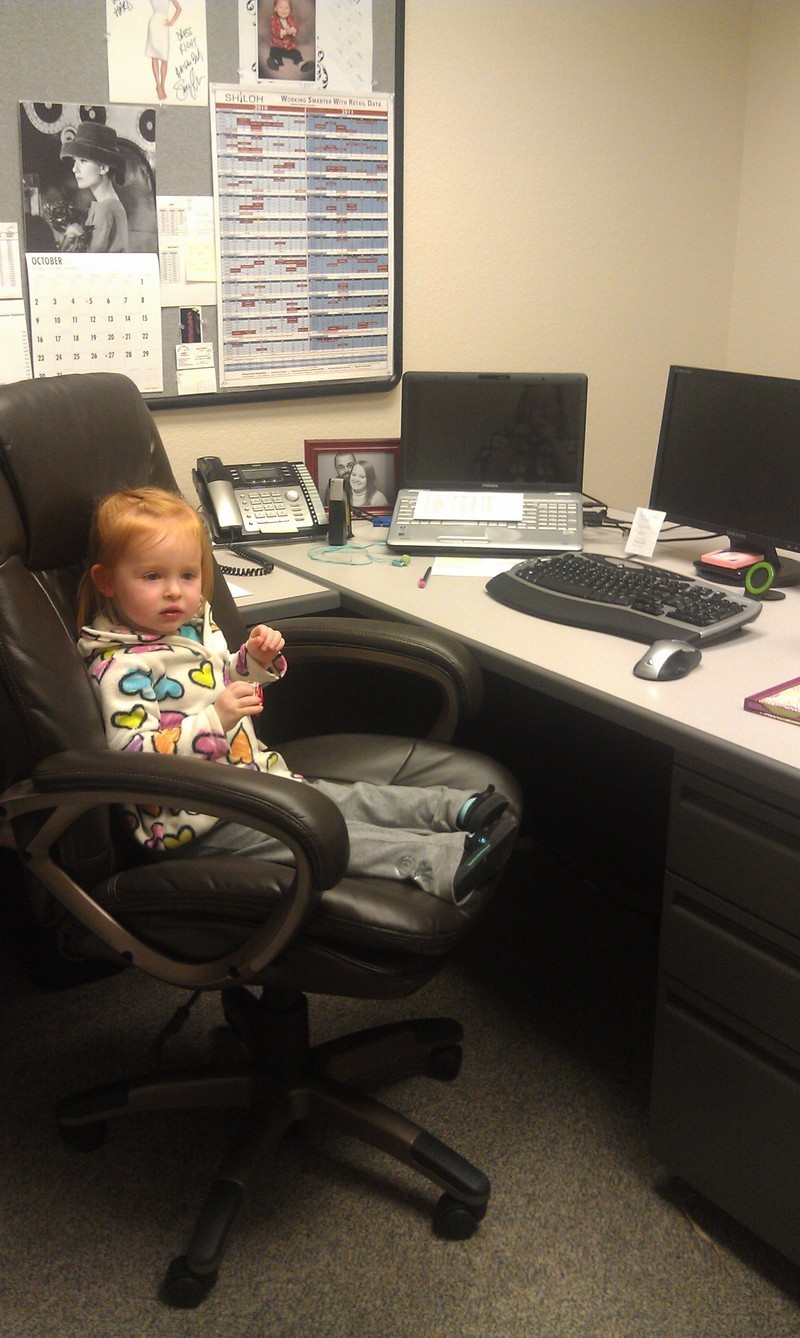 Like mother, like daughter? I had forgotten my phone at work today, so after dinner Aylin tagged along to retrieve it. She climbed right up into my chair. When I asked for a smile I got "no, I'm busy..." Then she climbed down to explore the rest of the office and decided jumping on the beds in the showroom was way more fun. :-D 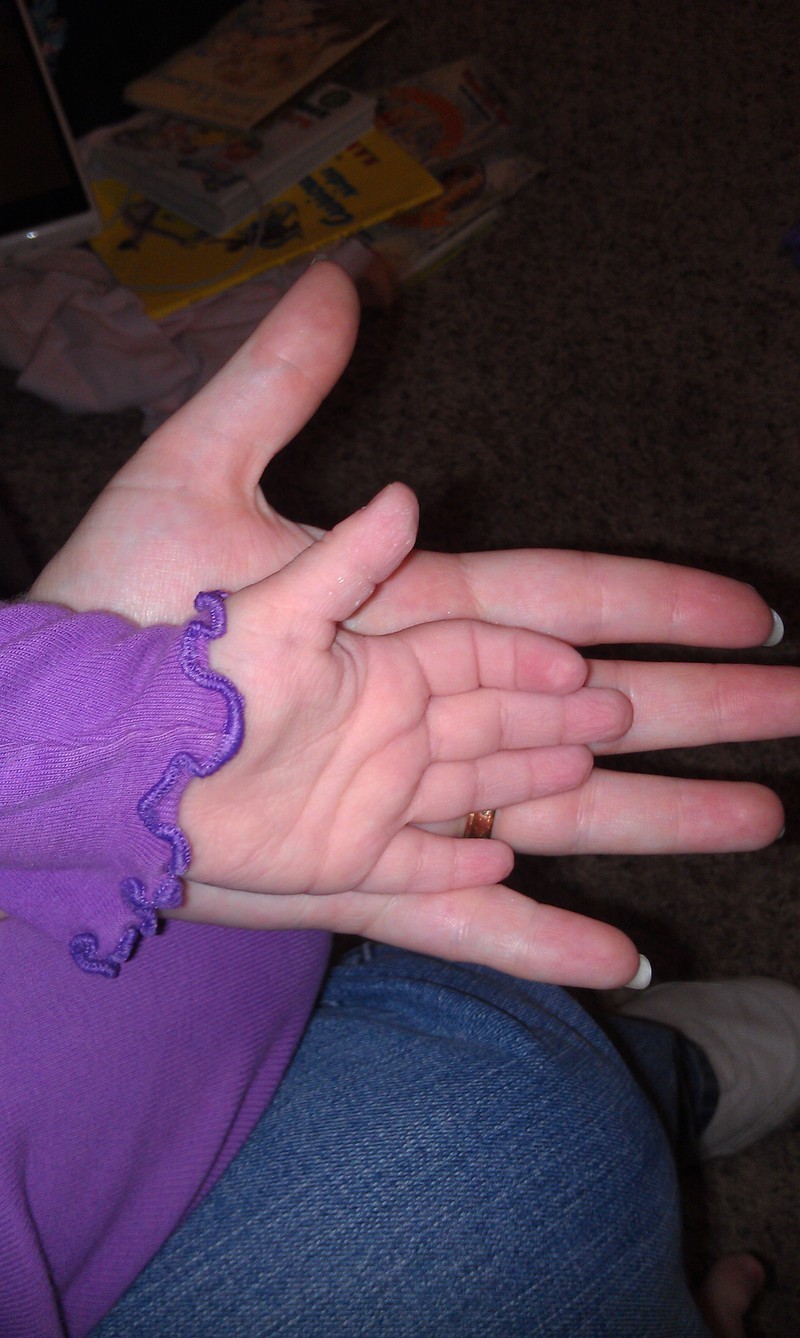