October, October. You came far too quickly! I was not yet ready for fall, but you came and went just the same. Ready or not, here you were.

Let's see here. The first week of October was exciting because Jeff had a tooth extracted (the same one that he got to have a root canal on after being damaged in his bike accident ended up not surviving), and Aylin also came down with a stomach bug the day after Jeff's surgery, plus I had parent teacher conferences that day. So that was fun. Two pitiful sweeties at home, while I ran down to the school to have a chat with Aylin's teacher. It was a great conference, I ended up being the last appointment of the day (and last parent meeting period) and she was quite chatty, so I got to learn lots of fun things about how the Ginger Girl spends her days. As has been par for the course, she adores reading and will read anything and everything she can get her paws on. Her teacher recognizes that she has great potential if Aylin will allow herself to be pushed a bit. So she decided that after the fall break, she was going to bring Aylin and a few other excited readers into a group and begin teaching them how to start doing book reports. Aylin really loves it, and her teacher is very strict in making the children be responsible for their learning. It has been really good for her. She struggled a bit the first week, or so until she got the hang of what her expectations were. Her biggest struggle seems to lie in allowing herself to be actually fully challenged. She has a perfection complex where she wants things to come out right the first time (no idea where that comes from.... *looks around sheepishly*), so sometimes she doesn't even want to try if she thinks there's a possibility that she may fail. Her teacher recognizes this, and holds her to a higher standard as a result. Which is a good thing, but it also causes frustration for Aylin. Learning how to stretch with that has been an interesting process, but I can already see how well the reading group she's been doing the last several weeks has helped advance her.

I experimented with my painting a bit, and my sister Becky gave me the inspiration for a fun piece: my Abstract Peacock. I had a lot of fun making this one, and completely lost myself in it for most of an entire day. I started on it relatively early in the day, mid morning, and didn't realize how late it was until suddenly my phone's alarm went off to remind me to start walking to school to pick up the kiddo. I finally finished it up with a few extra touches about a week later. 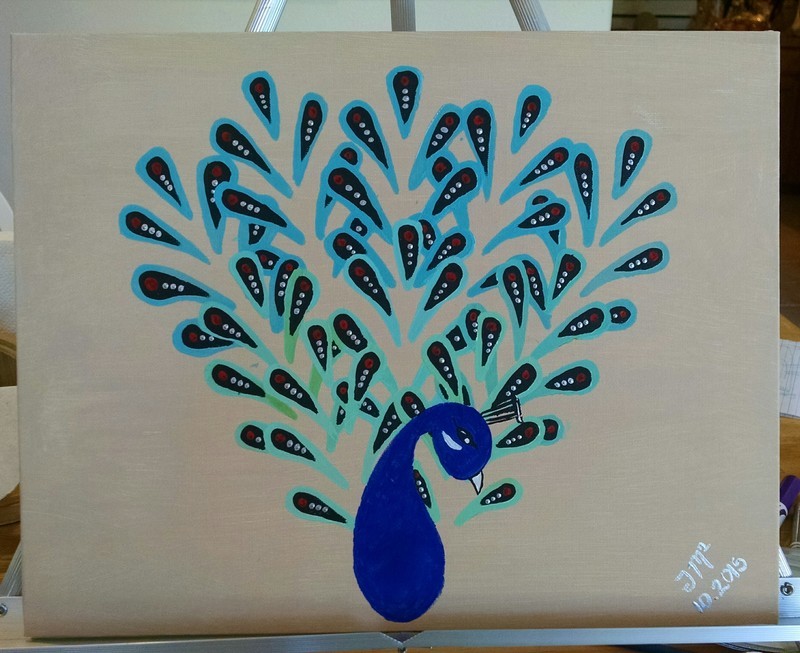 Aylin and I made some fun fall decor: 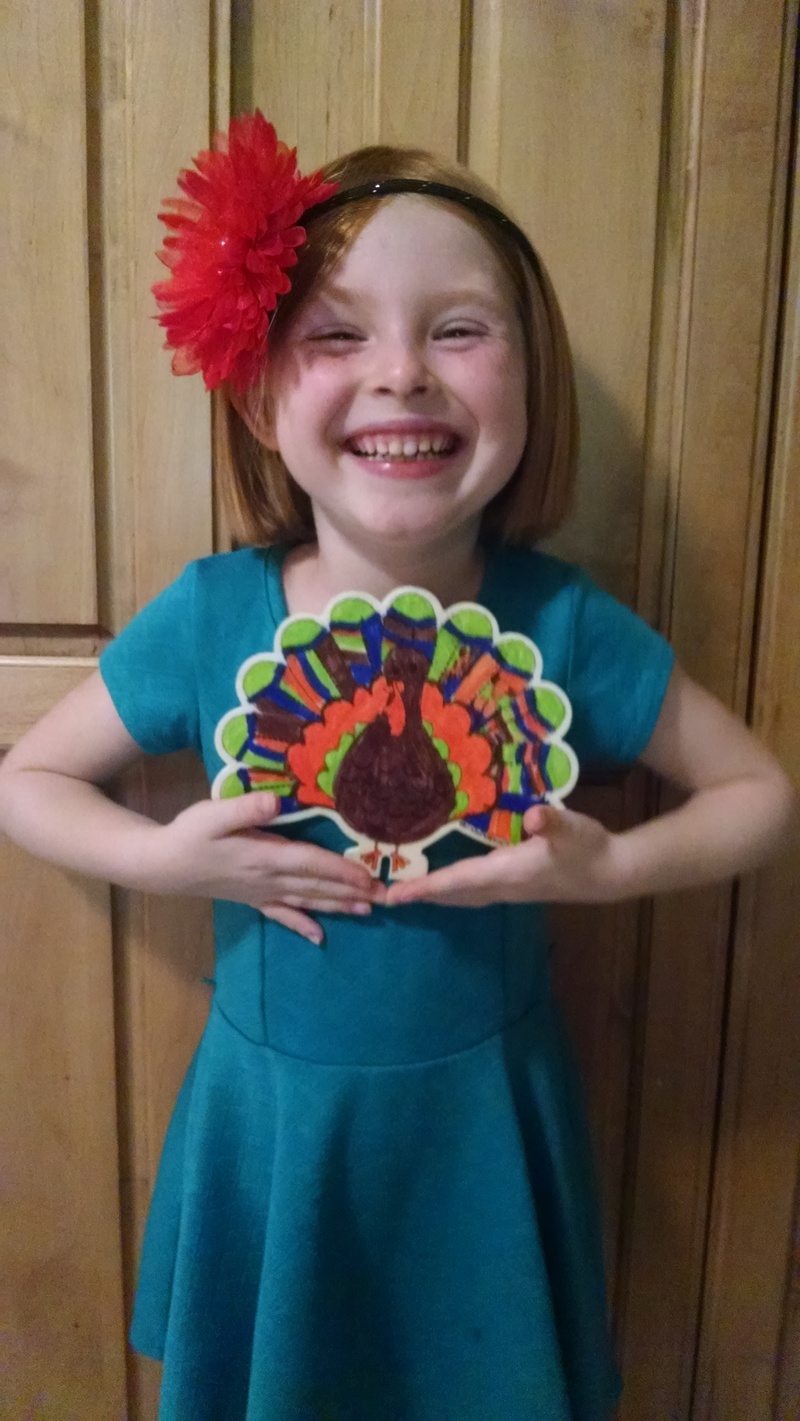 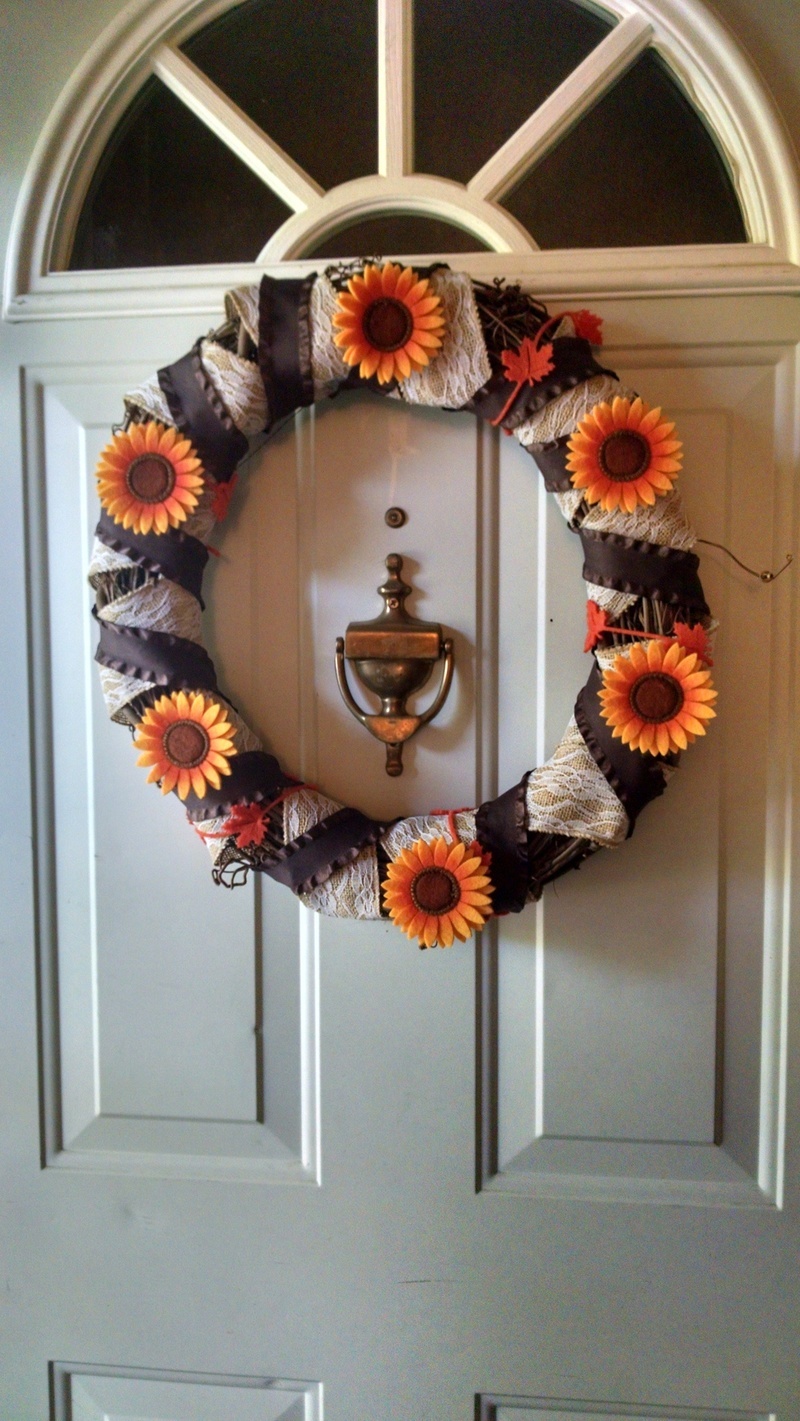 On fall break Aylin and I spent a lot of time at the Park, the Library, and the Amazeum: 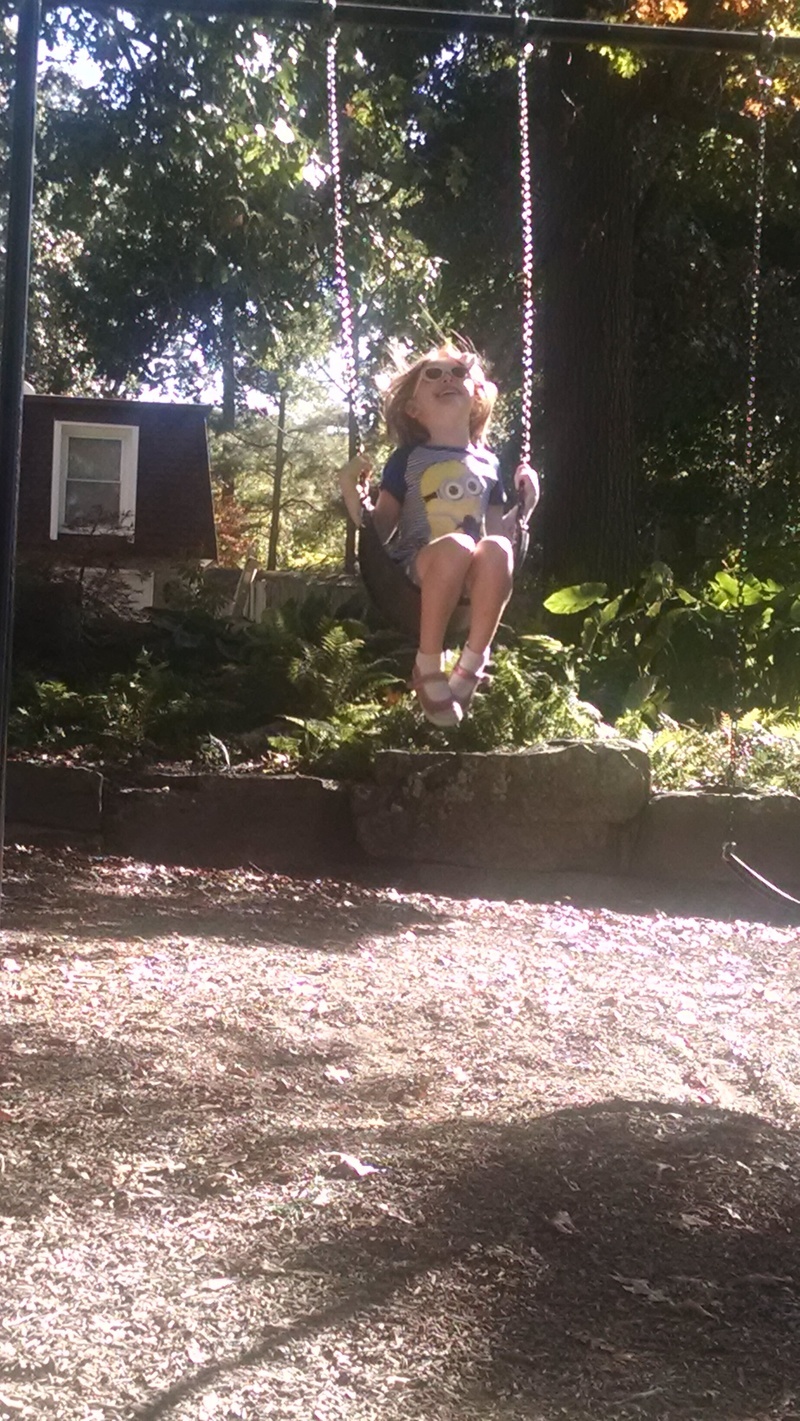 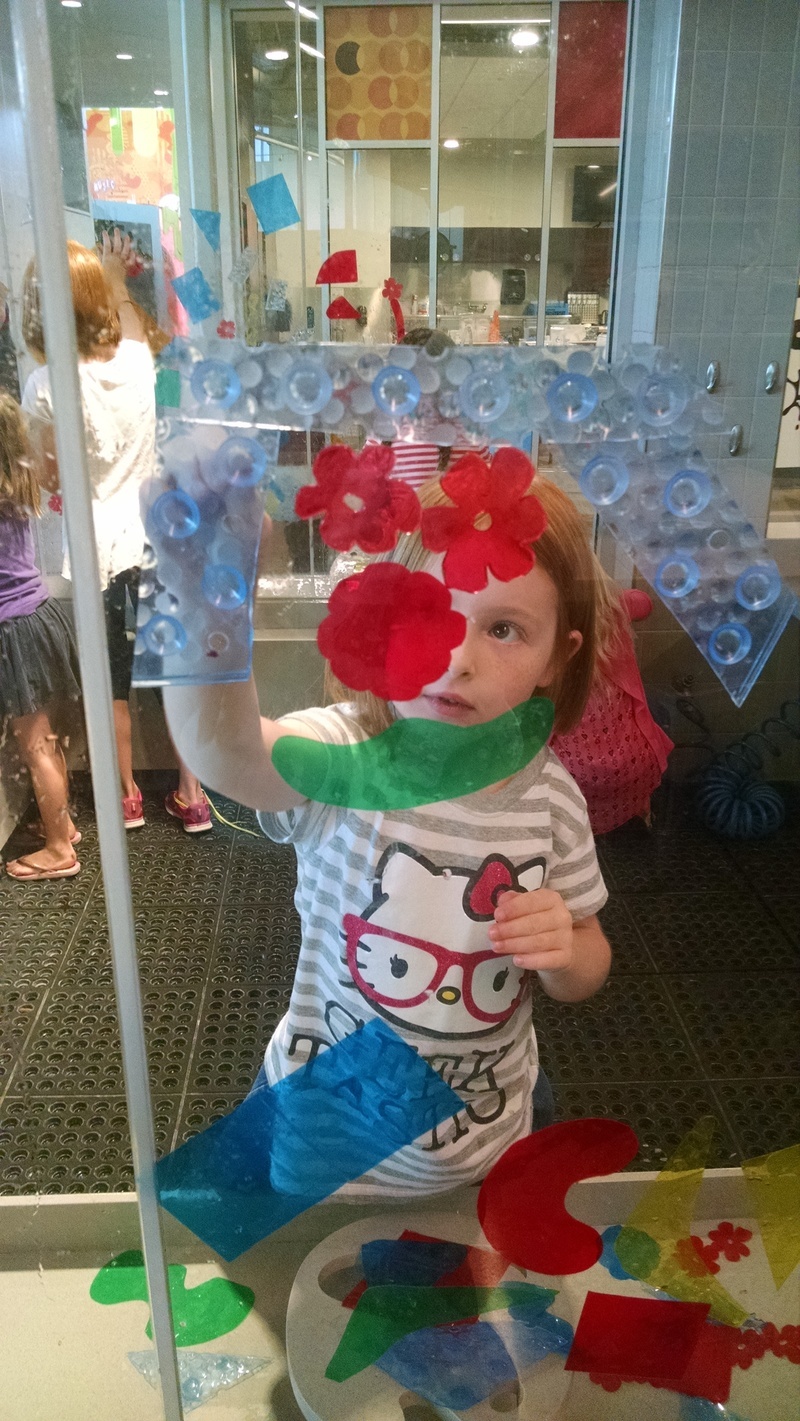 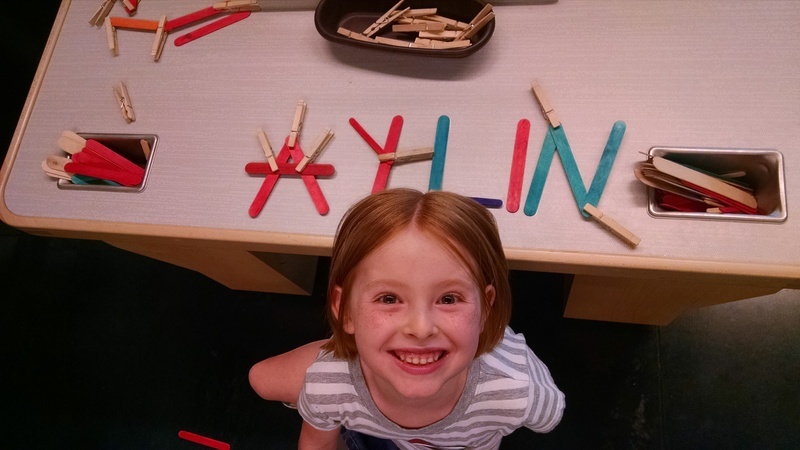 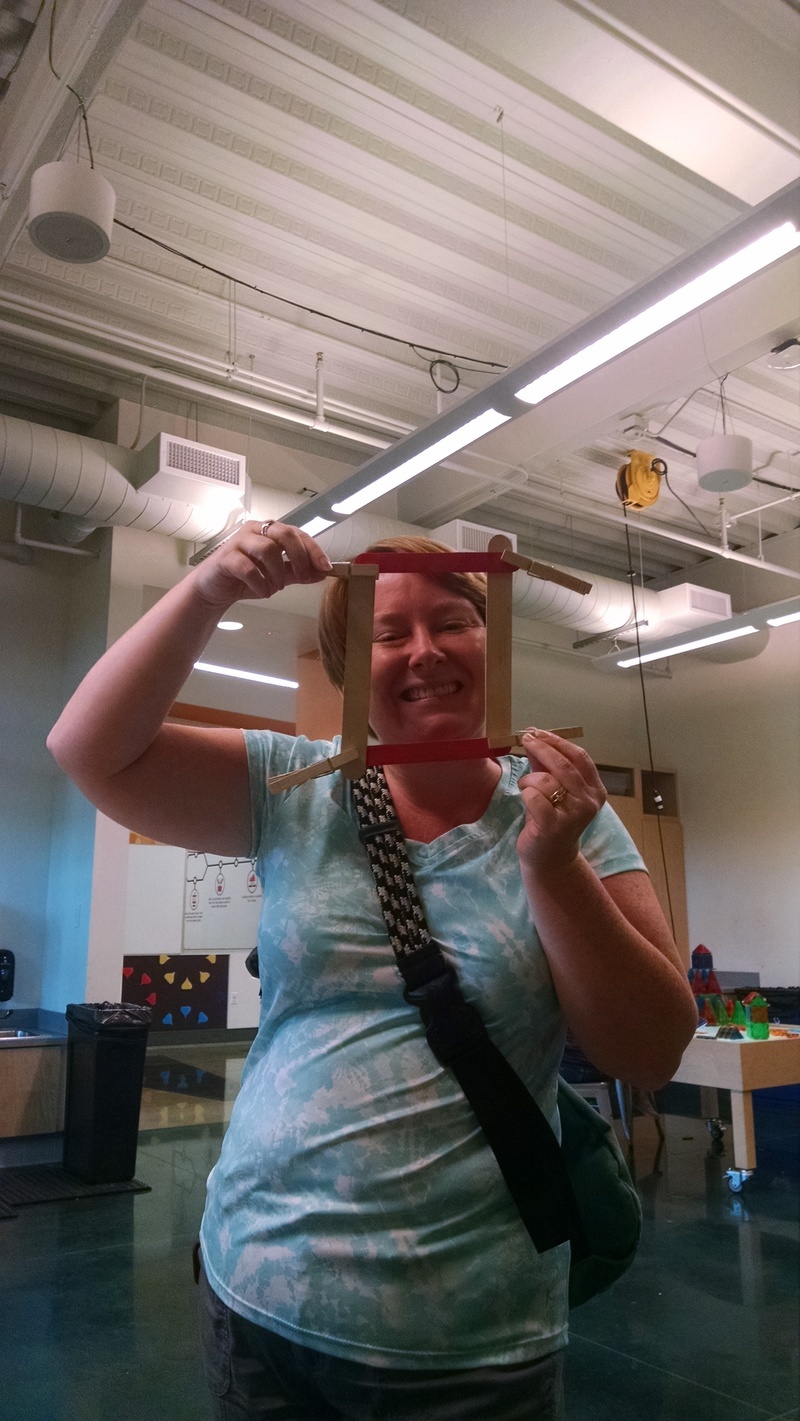 Momma got upgraded to an iPhone when my Moto X decided to kick the bucket. And to top off our fun fall break, we decided that while we were in Tulsa (to go to the nearest Apple store) we'd go ahead and make a day of it and go to the Zoo! That was the best decision yet, it was the perfect day to go to the zoo. The temperature was amazing! There wasn't a lot of people there, and we stayed all the way until closing time and got to have our very own personal tour back through the zoo from a friendly security guard on a golf cart. We were at the back of the zoo when it was 10 minutes till close and he offered to drive us back up to the front (mom was very glad for this because by then my feet were tired), and along the way he provided lots of fun commentary, and information about various animals as we drove by. Such fun! Family memories in the making! One of the fun/crazy things was this big brown bear who likes to terrorize children. It was on the other side of a large (THICK thank goodness) glass wall, so the kids would come right up and get close in it's face. It would lay there and act like nothing was going on, just chillin'. Then suddently it would turn it's head and get right in a kid's face and roar and paw at the kid from the other side of the glass. The kids figured out it's tricks though, and kept at it just to get it to try to eat them, and the screams and squeals were epic. 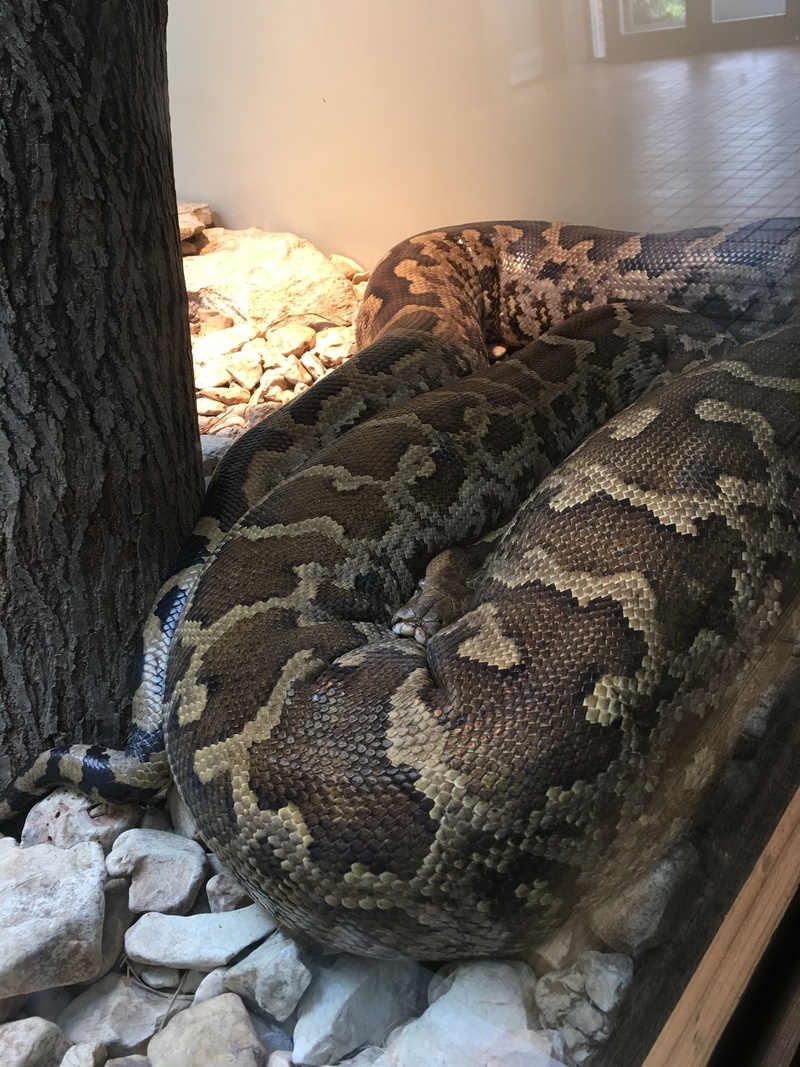 Then of course was Halloween. Aylin finally decided on Eowyn for her costume. We had fun finding something that would fit the bill (thankfully i found something on amazon in a decent price range that would work) and then added accessories to finish it off. I think we pulled it off quite nicely! Aylin also helped with the pumpkin fun. She picked the pumpkins, one we attempted to do melted crayons on (which worked, but didn't work as well as I would have liked) and the other Aylin picked out the pattern that she wanted me to use and I carved it after she scooped out the guts. Aylin had a blast at the school's Halloween Costume Carnival, which is total chaos, and loved by all the kids and endured by the parents. Then we got to go Trick-Or-Treating around the downtown area near our house with friends, which was fun. 4 adults following around 2 little princesses! Jeff even participated a bit (blow me over with a feather!) he wore his kilt, and a sweatshirt. 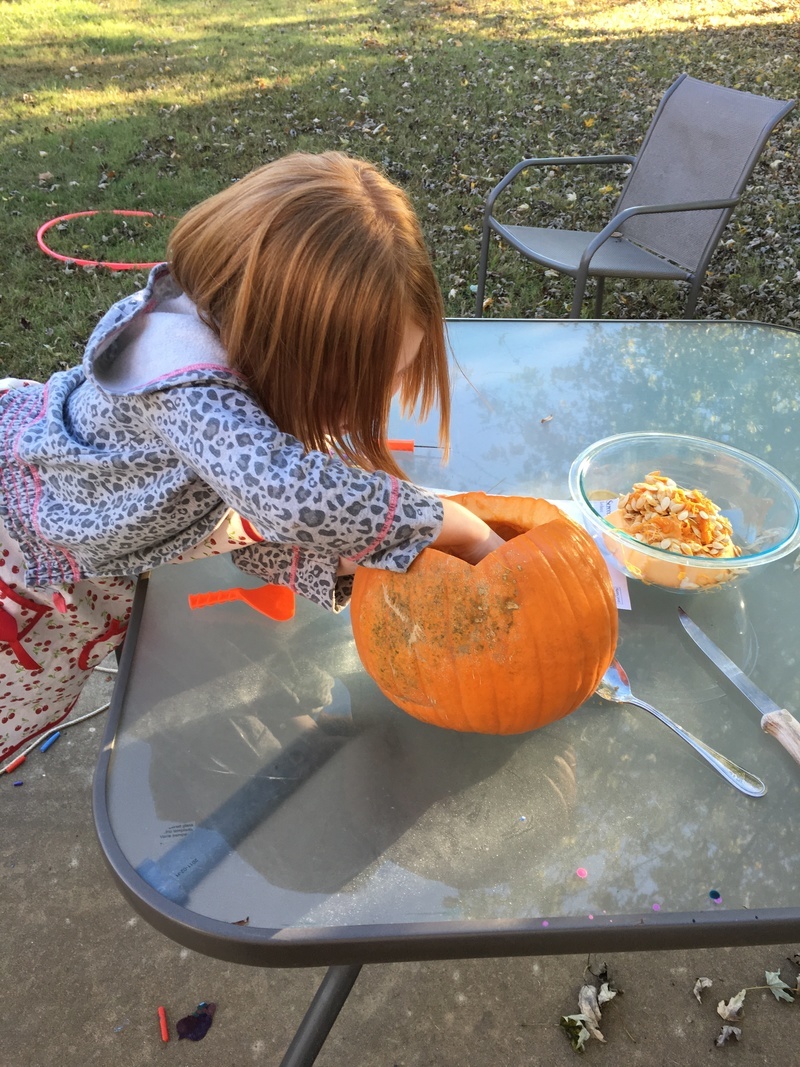 Well I think that about wraps up October!

September Aylin got to go on a fun field trip to see Shrek the Musical! I don't have any pictures, because I didn't attend this field trip, but she enjoyed herself. She mostly talked about how silly they were and how they kept making jokes about "toots" and stuff.

Jeff made a fun gif showing off his beard growth since the bike accident, but at the moment I can't seem to locate it so I'm going to leave this as it for the moment, and hope to get back to it at some point to put the actual gif in the blog...

I (Teena) took my bike out a little more on a few adventures. I'm not as steady as I'd like to be, partly from my vision issues, and partly because I can't touch the ground as well as I'd like so I worry about having to stop at stop signs and not tipping over... Maybe I just need to take it down to Phat Tire and see if they can help me adjust it properly. But I am getting more adventurous on it, and went for a 2 mile round trip ride.

We kicked off rEcess for this semester with a BANG! Always a super fun time.

Aylin got to meet some of her favorite Princesses at the Farmer's Market, and I managed to take home a pretty decent haul that day too! We love us some Farmer's Market days! 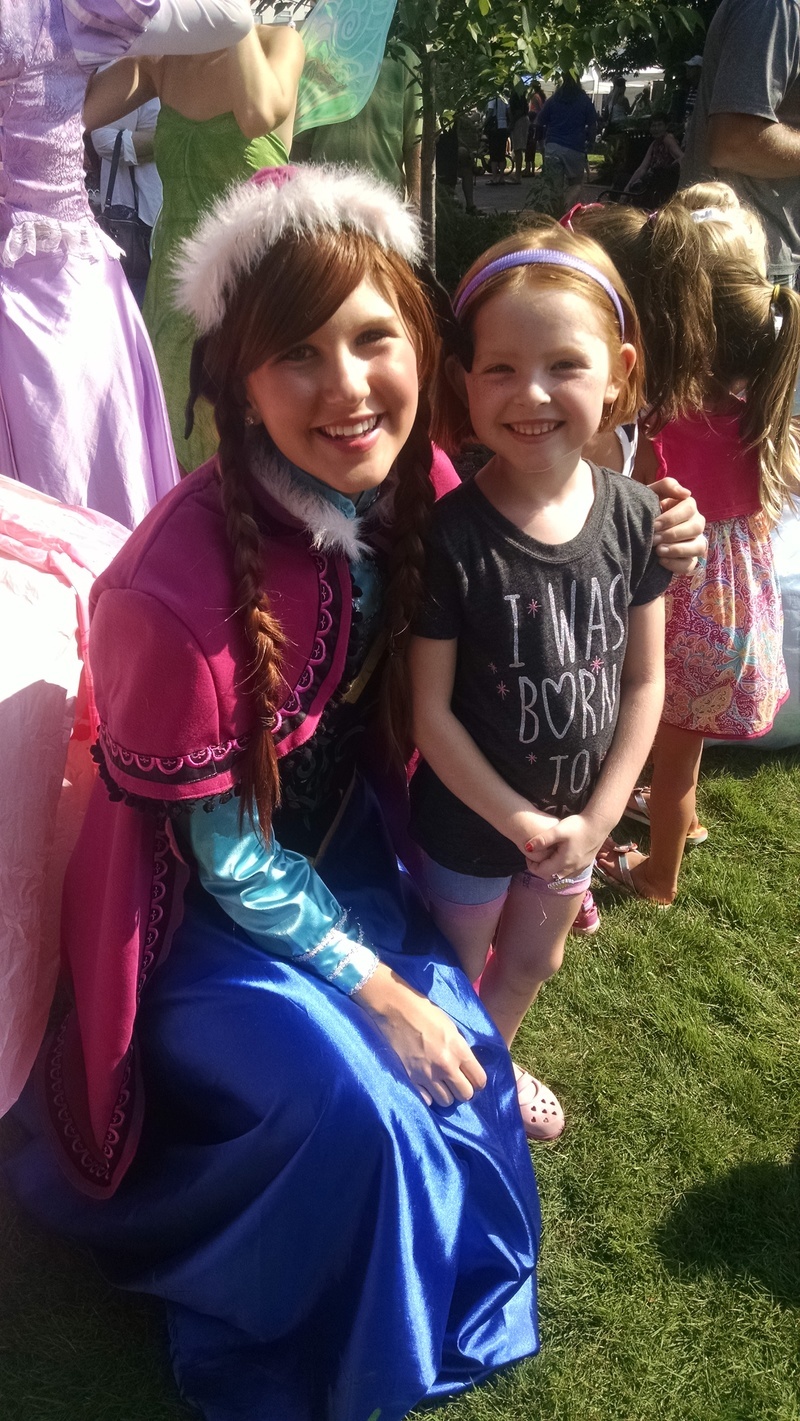 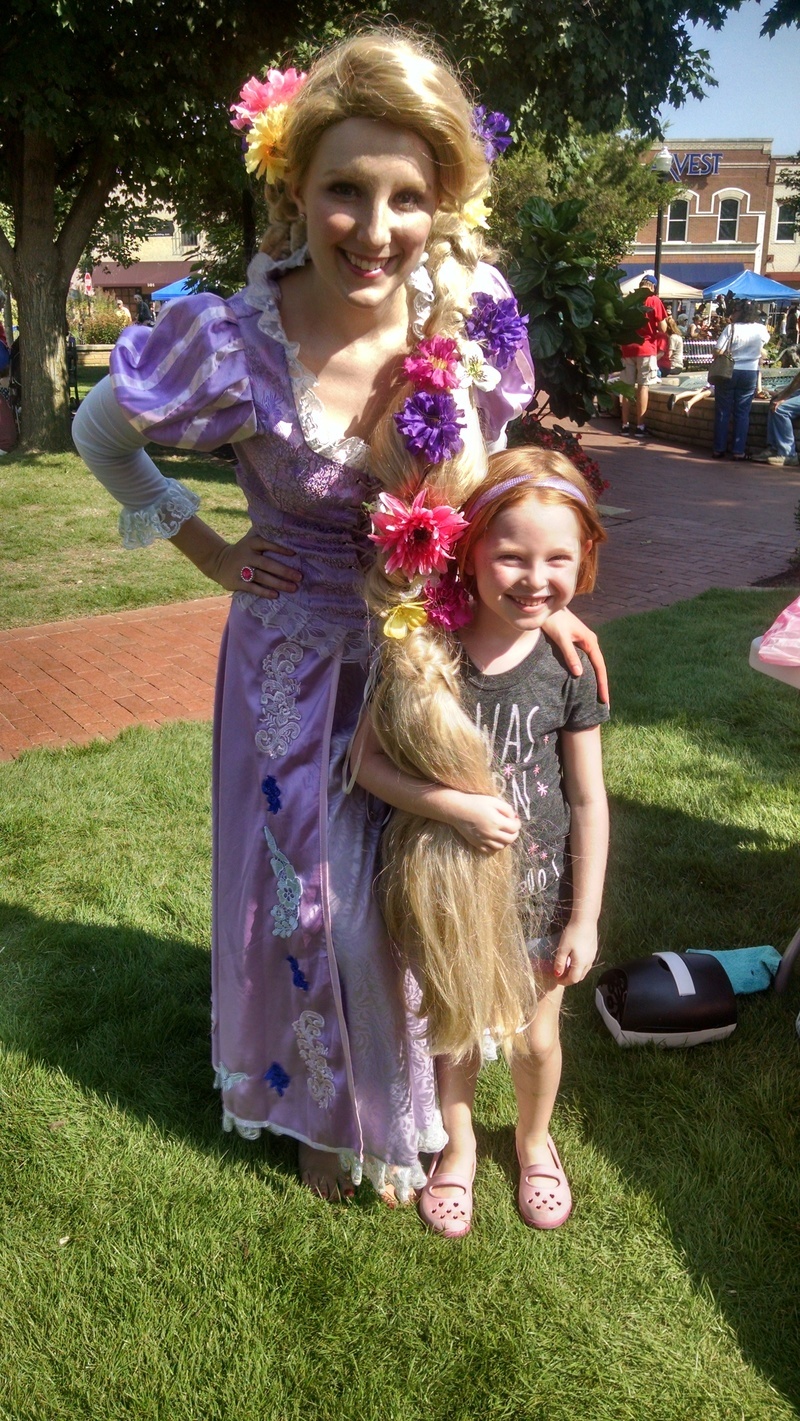 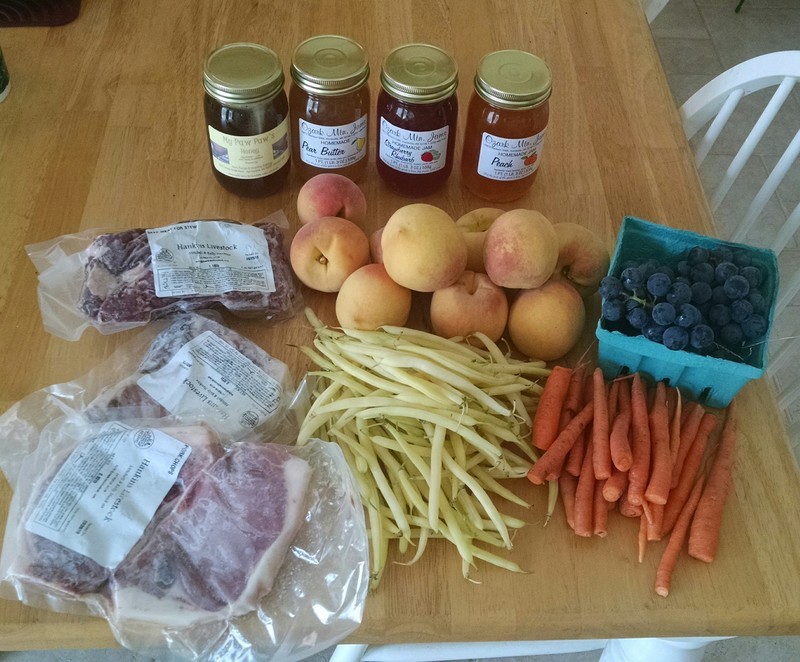 I made my very first ever homemade lasagna, and it was a vegetarian one at that! It turned out super yummy! 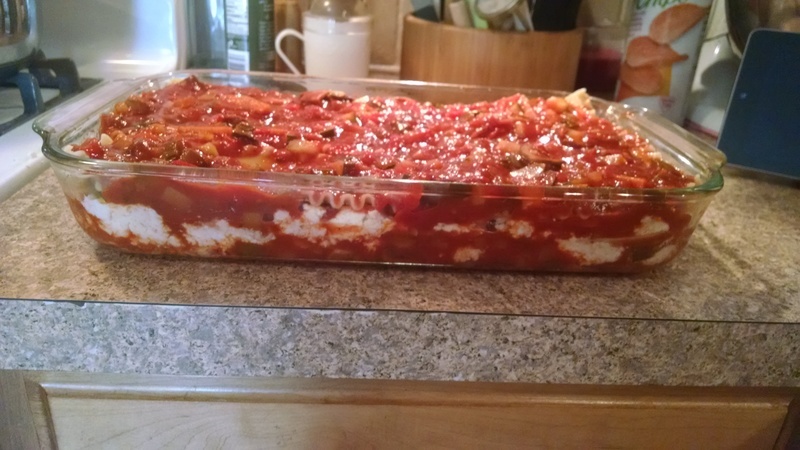 Of course the amount of dishes that went with that project was horrendous. But still, the lasagna was soooo tasty!! 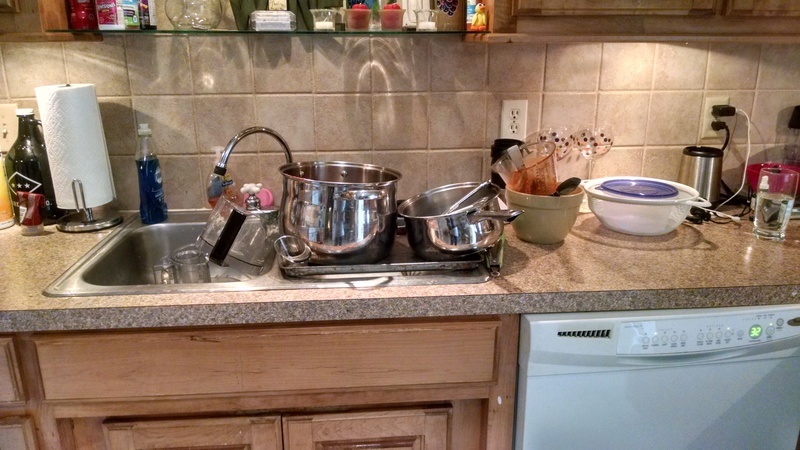 Aylin and I also spend quite a lot of time at the library these days, and one day she talked me into getting something from the cafe on our way out. So she shared her first every italian cream soda (raspberry of course!)... this face, she kills me! 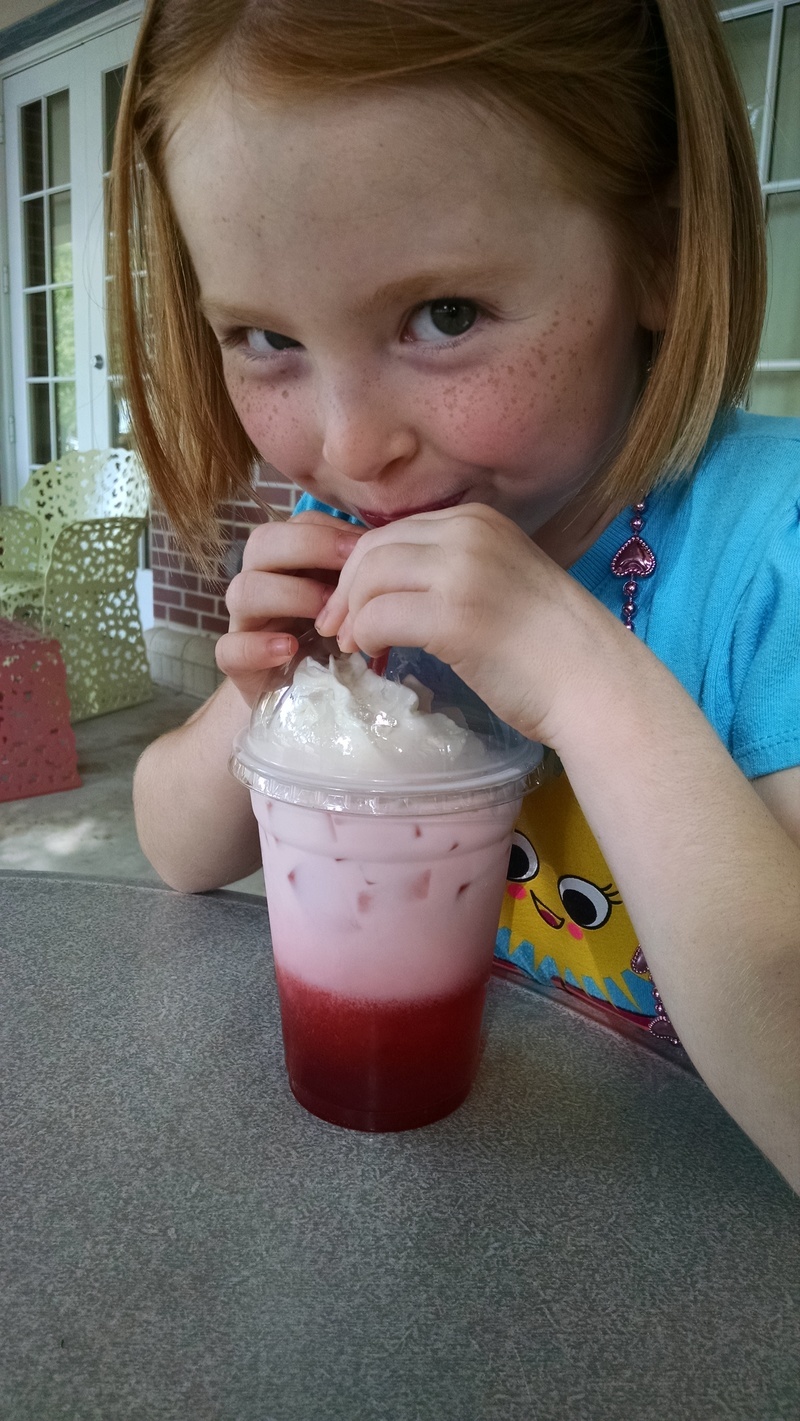 Oh, and homemade chicken pot pie, can't forget that! As well as some cheddar broccoli soup, as requested by the Ginger Princess. 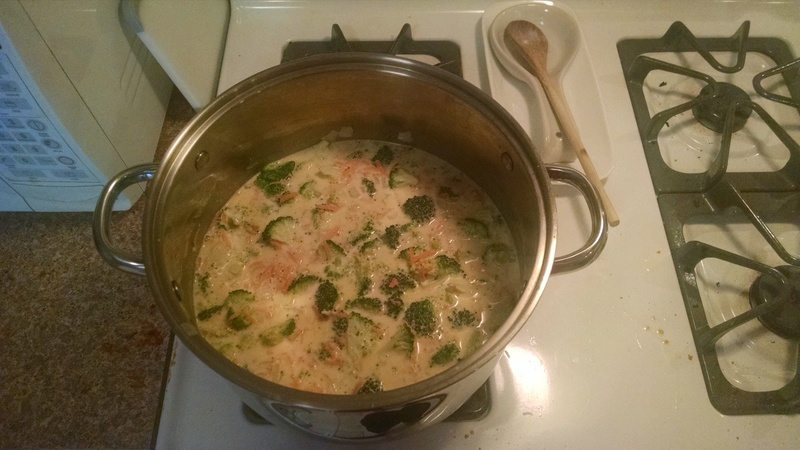 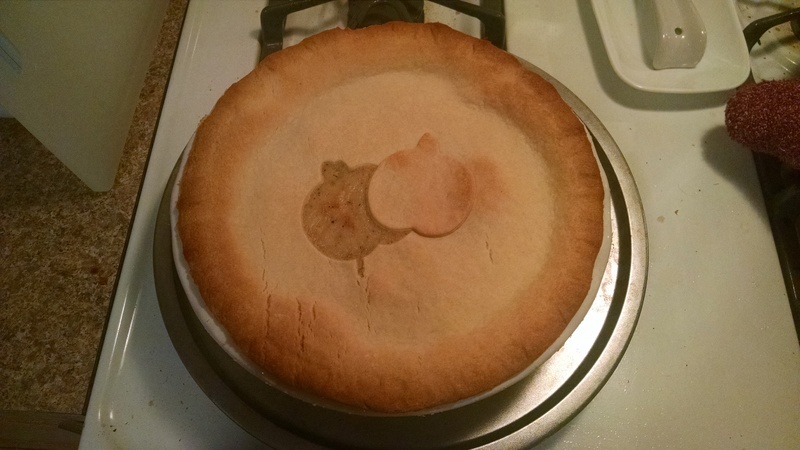 So May was a pretty full month! We had a little over a week break from school, during which the first Bentonville Film Festival was held. We also enjoyed our First Friday Flick for the summer at the Lawrence Plaza - Big Hero 6, and Aylin had a friend from school meet her to watch the movie with her. That sweet little guy made his mom wait with him in line nearly 30 minutes to get a flower balloon before the movie so he could give it to Aylin. Precious! And who could resist a walk to the library with a banana split on the way home?! Not US! 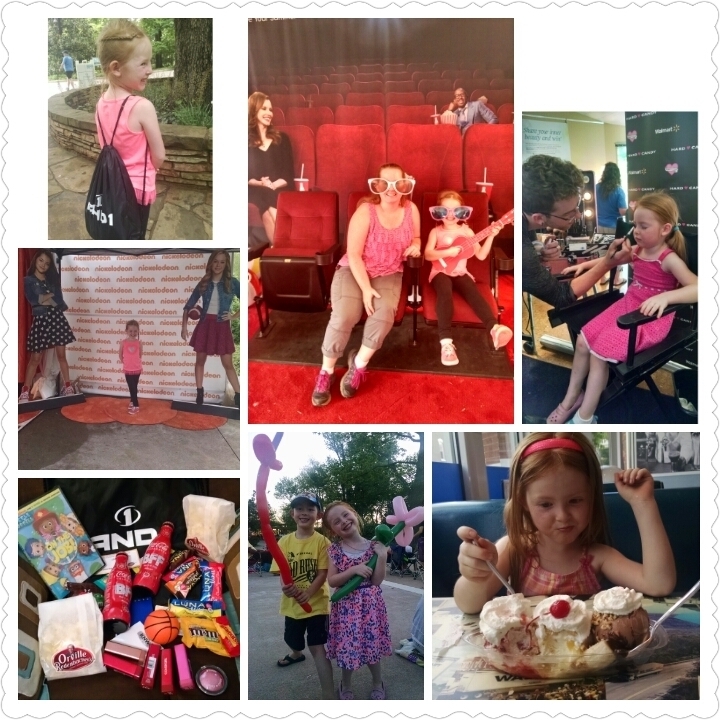 Then for mother's day we enjoyed a day at Crystal Bridges with Papa Joe and Grama Linda and company. Aylin adores her Uncle Robert, and she spent most of the trip in the museum attached to him. We also enjoyed a meal at Flying Fish where Aylin made everyone try her fortune telling fish - lots of fun! 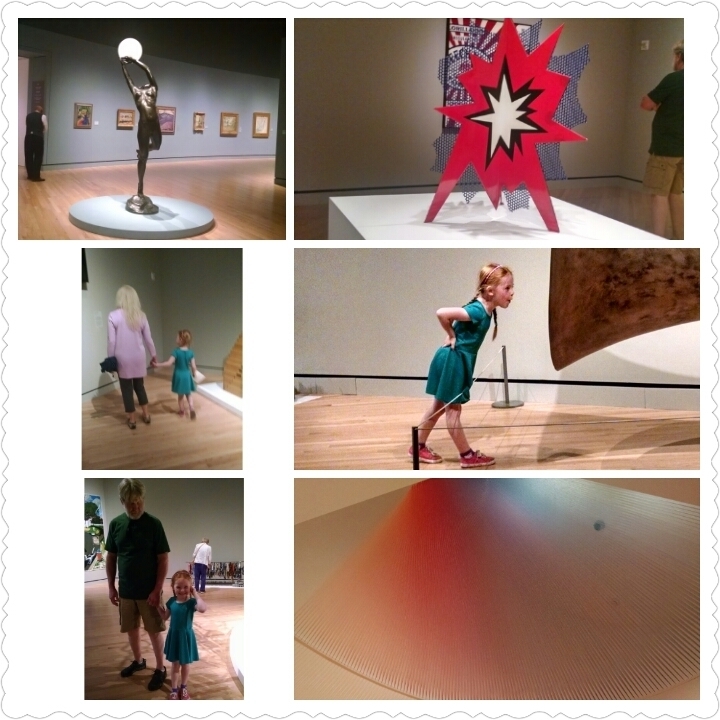 Then to top it all off Aylin and I both got haircuts and will be donating our locks. We are both loving our new short do's, just perfect for summer time! Now if we could just get it to stop raining... Aylin also had a project to complete for her class - Flat Stanley. We were supposed to pick a place or business in Bentonville and learn about it, and then bring our findings back to the school to talk to the class about it. Aylin picked the library, because that is one of her favorite places to be. We had fun gathering materials for the project. 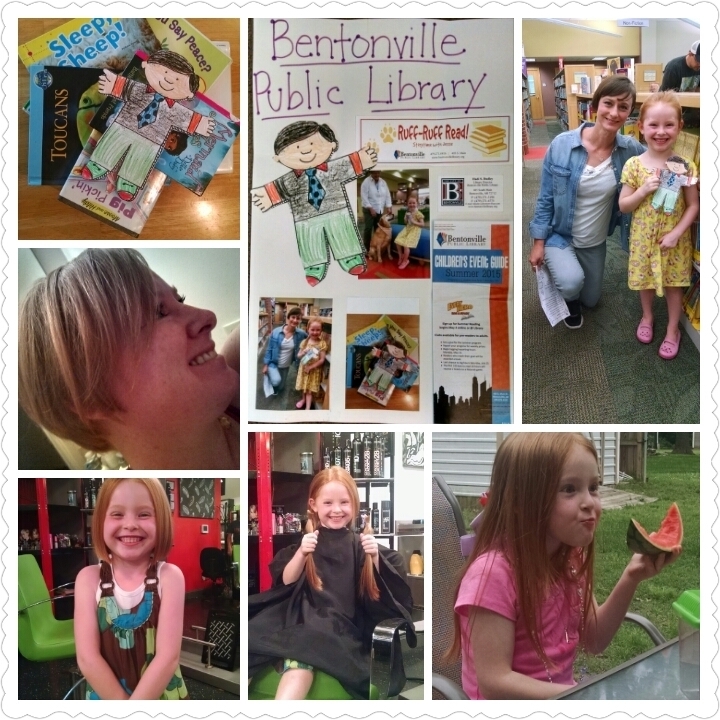 Well that's the skinny on the month of May in the Melton Casa. Stay tuned, June and summer break are upon us!